Tickets Are Available Online
Until October 28 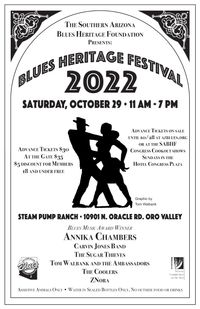 TICKETS AVAILABLE AT THE GATE.

What can I bring to the festival?
Tickets! Printed or on your phone
Sealed water bottles
Sunscreen, hats and sunglasses
Small umbrellas (any umbrella that can fit in a purse)
Blankets or beach towels
Lawn Chairs
Valid Driver’s License for will-call and/or to drink alcohol
Warm clothes for the evening
Cash: some vendors only accept cash
Dancing shoes and a good attitude!

What items are NOT allowed inside?
Pets (except service animals)
Pop up tents, canopies, hammocks or large umbrellas – Nothing that has to
be staked down!
No Weapons of any kind
Ice chests or coolers
Outside food or drinks
Alcoholic Beverages
Laser Pointers, Drones, or Remote Controlled Vehicles
Fireworks, sparklers, or incendiary devices
No unauthorized vending – if you are not a registered vendor you cannot
sell or distribute anything on festival grounds. Violators are subject to be
ejected.

Annika Chambers, like so many powerful vocal artists, can trace her love of music back to early childhood.  “I grew up singing in the church,” she says, and you can’t help but feel the Spirit move you when Annika throws herself into the heart of a song.

When Annika served for two tours in the US Army one of her colonels heard her singing and said “Why don’t you sing the Anthem for one of our ceremonies?”  She was an immediate hit and became their first choice for all their musical events, joining the gospel choir and winning the base talent show.  She became part of a touring band traveling through Kosovo and Iraq, lifting morale and bringing joy to our deployed troops.

She returned home to Houston and made her debut album, “Making My Mark,” which brought her a nomination for the 2015 Blues Music Awards (BMA) “Best New Artist.” In 2019 she won the coveted BMA “Best Soul Blues Vocalist” award and has been featured at major festivals across the US and Canada.  This summer, two intrepid SABHF board members saw her at the Chicago Blues Festival and knew on the spot that we absolutely had to bring her to Tucson so all of our friends could share in the pure joy of hearing her amazing voice!

A virtuoso on both electric and acoustic guitars, Paul DesLauriers (pronounced "day-loree-ay") is part of Canada's guitar elite and is considered one of Quebec's overall best guitarists; but it doesn't stop there, he's also a powerful and expressive singer. Winner of the Lys Blues Award for Best Artistic Performance in 2011, Album of the Year in 2008 (En Duo), and Best Musical Performance in 2005, he was also nominated at the Canadian Maple Blues Awards in 2008 for Acoustic Act of the Year along with Dawn Taylor Watson for their album "En Duo." In 2010, DesLauriers was musical director, producer, and performer on the "Nos Stars Chantent Le Blues a Montreal" CD for L'equipe Spectra and the Montreal International Jazz Festival. Paul's 2006 solo release "Ripping Into Red" garnered rave reviews in the April 2007 issue of Guitar Player Magazine. Editor in Chief Michael Molenda has this to say about him: "DesLauriers really knows how to grab your ears from note one... He's also a gifted songwriter and vocalist, and his solos, especially the slide lines, are short but thrilling!" -- last.fm

Carvin Jones "The King of Strings"